All About Korean Nose Job Procedure

Korean Rhinoplasty (also know as Korean Nose Job) is a procedure which can change the shape of the nose both internally and externally.

Under the Golden Ratio of Rhinoplasty guidelines, our surgeon will design a perfect nose that best suits you through mathematical measurements and our 3D Virtual Forming system. The 3D Virtual Forming system compares the before and after photos prior to the surgery, allowing patients to have a better understanding of the operation and detailed conversations with the doctor.

Moreover, with this system, not only does Dr. Choi Min design the nose, but he also makes sure to create a nose of the utmost satisfaction for his patients.

Cartilages (including the nose cartilage, ear cartilage, and rib cartilage) and prostheses are chosen according to your opinion and the doctor’s recommendation. It is vital to insert the material that suits you perfectly.

An implant is usually performed when lifting the height of the nose. Implantation is suggested to those who need:

Through nasal tip plasty ( nose tip plasty ), you will be able to treat the tip of your nose. By getting the most appropriate operation, people will get a more balanced, better-shaped nose tip. People seeking to only have tip plasty usually have minor issues with the external look. Tip plasty is suggested to various patients who need:

Implant and tip plasty can be used simultaneously in cases where patients have various complexes in their nose and are receiving several other surgeries as well. In this situation, the surgical process may be a little more complex compared to a single procedure, but Answer Plastic Surgery of Dr. Choi Min has the skill and experience to safely bring the best results. This operation is recommended to those who need:

Why use personalized cartilage & prosthesis for Rhinoplasty?

Answer Plastic Surgery Clinic chooses the cartilage for your surgery according to your situation for the optimal outcome. Personalized cartilages and prostheses not only bring you aesthetic beauty but also better nasal function.

You can compare your before and after photos prior to your surgery through 3D Virtual Forming. Through the skill we obtained through diverse experiences, we promise to give you the results of the best satisfaction. Types of Prosthesis and Cartilage

Details of each material are listed down below.

Silicon is a medical prosthesis that has the longest history among all. It is used for various parts of our body including our forehead, breast, nose, and chin.

Gore-tex is a product which has high adaptability to our bodies. However, due to this feature, the thickness may decrease up to 50% after a length of time.

Using the nose cartilage does not require any harvesting apart from the nose, resulting in no additional scars or stitches. As time passes, however, it tends to become weaker and cause nasal column (the section between the nostrils) deviation.

Due to the abundancy of ear cartilage in comparison to the nose cartilage, this method is commonly used. Not only will scars be covered, but it also maintains the initial shape for a long period of time. This must be done by experienced doctors due to the detailed curves in the ear cartilage which affect the final outcome of your nose shape.

Due to its abundancy and strength, major reconstruction (change in length and angle) of the nose is possible through the use of rib cartilage. However, you may experience stiffness and will have an incision on your chest.

Using donated rib cartilage is another option in which the cartilage is well absorbed into the body. However, when an infection occurs, it may spread widely.

Dermis graft is often used for areas where artificial prostheses cannot be used, and also greatly reduces the possibility of any side effects. It’s tendency to absorb into the body, however, reduces its thickness over time and also may cause an uneven skin surface due to uneven absorption.

Like dermis graft, as it’s one’s own tissue cells there’s low risk of side effects.  After making it into bits & wrapped as candy shape, it can be used as a substitute of the prosthesis. It can be used for situations where artificial prosthesis cannot be used. However, fascia cannot be shaped in detail.

As alloderm is soft as a skin, it can make nose bridge and tips of the nose looking naturally. Alloderm is used to prevent the nose from slimming down.

Generally, three types of cartilages (ear cartilage, nose cartilage, and rib cartilage) are used in rhinoplasty. These unique properties allow surgeons to operate differently depending on the patients. Answer plastic surgery clinic not just pursue one type of cartilage to patients. We satisfy the high expectations of patients by using personalized cartilages. Q: Will my nasal tips fall off when surgery is done with ear cartilage?

A) The ear cartilage can be used in various cases. Generally, the ear cartilage is stacked like a tower. When the supporting material is not strong enough, the nasal tip may fall off. This depends on the method of the doctor.

The advantage of using nose cartilage is that extra cartilage is not extracted elsewhere, it’s just from your nose! Moreover, since it has a flat surface it can support other parts or lengthen the tip. If nasal septal cartilage is not used in appropriate cases, the nose may look deviated or possibly weaken as time passes by. Q: Will my nasal tips fall off when surgery is done with ear cartilage?

A) Out of three cartilages - nose cartilage, ear cartilage, rib cartilage, nose cartilage is the easiest to extract. It can be used easily because of its flat surface. However, after a year of rhinoplasty, the thickness of nose cartilage may shrink thus lead nose tips to fall off. However, with an experienced surgeon in Answer plastic Surgery clinic, we can minimize the probability of the tips being detached.

Q: Generally nose cartilage and ear cartilage are used simultaneously. Can you just use one type of cartilage for the operation?

A) Yes, it is possible. In Answer, we build up nasal tips maintaining its supporting fixture at the same time. Therefore either nose cartilage or ear cartilage can be used as a minor amount of cartilage when grafting.

Q: Will my nose deviate when nose cartilage is used?

A) Normally, when nasal septal cartilage is used above a deviated nose the supporting fixture may weaken, leading to much more deviated nose. Balancing deviated nose beforehand may prevent the nose from warping over afterwards.

Rib cartilage is the strongest cartilage out of all three cartilages and is abundant. It can be extracted safely and quickly only excising 2 cm of the skin. These days, hospitals use imported rib cartilages. In this case, the absorption rate may be higher than using one’s own rib cartilage. Rib cartilage may warp over time of surgery thus keeping it in balance is the main thing that the surgeon should keep in mind. 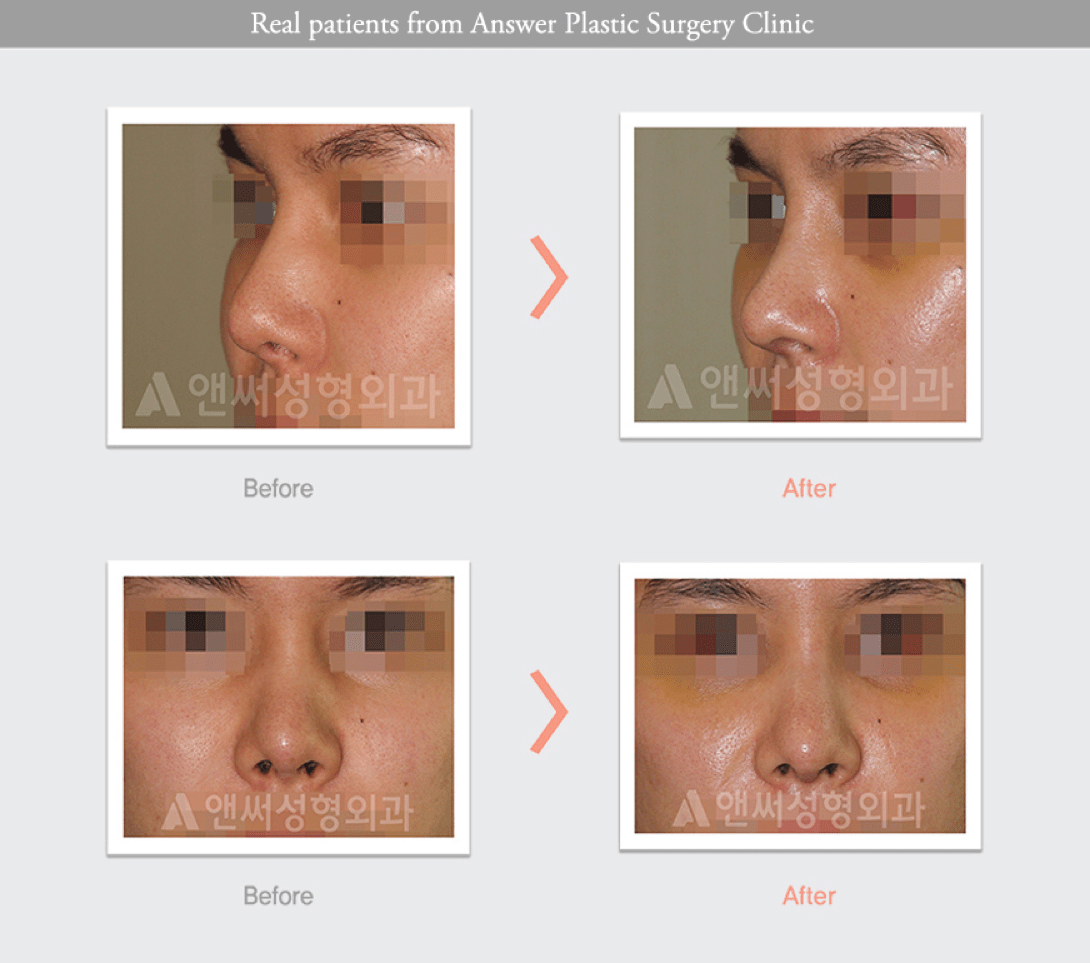 Q: When do we use rib cartilage in rhinoplasty?

Q: If rib cartilage is used can I have higher nose tips?

A) As rib cartilage is abundant, it can be utilized well. When your skin or alar cartilage can stretch well, you can have higher nose tips.

The advantage of non-incisional rhinoplasty is that there’s no scarring under this type of operation.

Moreover, there’s less swelling and the surgery time itself is short so people can go back to their daily lives fast. The surgery may seem simple but since it requires more precise work, surgeons should be experienced in this field. The inner part of the nose is incised, leaving no scars externally. This process can be done in diverse operations – for those who need implantation, deviated nose correction, humped nose bridge correction, and blunt or bulbous tip correction.

Q: Is there less swelling than normal surgeries?

A) Yes. While normal surgeries excise larger amount, non-incisional rhinoplasty incises narrow parts. Therefore swelling is less than normal surgeries which makes it easier for people to go back to their daily lives.

Ultra fine tool is used when holding a suturing thread. Normal tool is limited in doing a precise operation. However, since the ultra fine tool is petite compared to a normal tool more sophisticated job can be done in small spaces. May not answer if a consultant is with a patient.